As you ramble on through life, brother, whatever be your goal: keep your eyes upon the donut, and not upon the hole!
-- Dr. Murray Banks A few weeks ago, our 15-year-old pool pump and filter finally gave up the ghost. And to tell you the truth, I was relieved. The old equipment was loud, a 2-hour chore to clean every few weeks, and we had to run it 24 hours a day because when it was shut off for more than a few minutes, the pump would not prime on its own. Even though it was a major expense, the new state-of-the art energy-efficient pump and filter quickly got the pool water cleaner than it had ever been, and automatically shuts off at night, so we’re saving lots of electricity. It’s a snap to clean. And, it is wonderfully quiet. As I write this, I’m sitting outside, about 30 feet away from it and I absolutely cannot hear it running.

But a couple of days after it was installed, the pump suddenly got much, much louder. Actually, it wasn’t really louder when I was standing next to it. What happened was that it started sending an annoying, low-pitched hum throughout about half the house and most of the outside area around the pool. That, of course, was extremely disappointing. I could not figure out what had happened. The very knowledgeable and experienced guy who installed it told me it might get a little louder if the skimmer basket and trap basket became full of debris, so I cleaned both out completely. That seemed to help a little, but not really that much. The hum persisted and I was quite dismayed.

I tried gently nudging the equipment in the hopes that maybe I could stop the noise. I decided that perhaps the dry ground (we’re in the midst of a bad drought) might be transmitting the vibration of the pump to the house’s foundation, so I watered the grass real well around the equipment pad. That did not help at all.

I had been out to look at the equipment dozens of times, always focusing on the problem. In fact, the solution was extremely simple, and had been right in front of my eyes all along. But because I was so heavily invested in the problem itself, that annoying hum, I failed to look at the overall picture. Then, after a few days, I did finally step back to see what was happening.

It turns out there was a backwash pipe installed on the system, and that backwash pipe was resting against the downspout of the house’s gutter. The pipe was transferring the pump’s vibration to the hollow, metal gutter. That gutter was acting as a 25-foot-long acoustic amplifier, carrying the vibration up to the roof and all the way across the back of the house. The moment I pulled the backwash pipe away from the gutter, the annoying hum was completely gone.

I suddenly understood how blinded I had been to the obvious solution because I had been so annoyed and focused on the problem itself. The moment I backed away from the problem, and looked at the entire situation, it only took a few seconds to correct. Albert Einstein said, “You can never solve a problem on the level on which it was created,” and never before have I had the truth of that quote so vividly demonstrated to me.

It makes you wonder, doesn’t it? What difficult and annoying problems are you living with and complaining about, that have simple, elegant solutions that are right there, out in the open, to see?

Even though the problem whines (literally, in this case) for attention, it’s important to step back from it and to look at the whole situation. That’s when the positive possibilities will suddenly make themselves apparent. 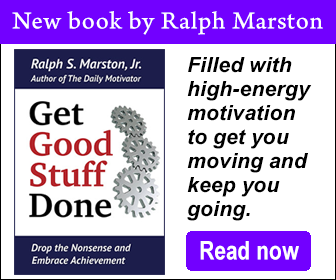