Action indeed is the sole medium of expression for ethics.
-- Jane Addams

Move your dream
from someday to now

Here’s a seven-word sentence that encompasses everything you must do to really, truly live your dream: It’s fun to dream, to think about what you would like to do someday. But that someday part is a real problem. As long as you see your dream as occurring someday, it’s not going to happen for you. Every person who has ever achieved a dream has done so by changing that dream from someday to now.

What’s involved in doing that? Action. There is something you can do right now to begin living your dream. Of course that presents you with a real challenge. Are you serious about your dream or not? Do you truly want to live the reality of it, or do you just want to keep dreaming and wishing and hoping for it your entire life? If you’re serious, there absolutely is something you can do right now, some very definite start you can make today.

Yes, I know about the excuses. You have all sorts of them. After all, if you didn’t have all those excuses you would already be living the full and complete expression of your dream. But you’re not. What enables you to keep your distance from your dream are those very impressive excuses.

There’s not enough time. There’s not enough money. You don’t know anybody who could help you. Something’s holding you back and it’s not your fault. You’re tired. You got off to a slow start. You have a slow metabolism. What else? Do any of these sound vaguely familiar?

The most powerful excuses are the ones that are true. Some excuses are just flat-out lies, and you know it, and those are pretty easy to get beyond. But the excuses that are real and valid and reasonable and true, those have the power to hold you back forever if you let them. The good news is, you don’t have to let them.

Even though you have all sorts of great excuses, you can take action anyway. Even though there are plenty of totally valid reasons for not moving forward, you can move forward anyway. Here’s a really clever way to do that. When you change your dream from someday to now, you can make an offsetting transaction. You can move your excuses from now to someday. Make your dreams and your excuses trade places! Once you do that, the excuses lose all their power. Because you move your excuses to someday, and someday never comes. It’s never someday. It’s always today.

What’s so powerful about this little trick? It transforms the excuses that once held you back into powerful, compelling reasons for moving forward. For example, consider this all-too-common excuse:

“I don’t have enough time.”

Take that excuse and move it from now to someday. Here’s what happens to it:

“Someday I won’t have enough time.”

So far, so good. It’s no longer an excuse that you can use today. But there’s more, and here’s where it gets really interesting. Say the above sentence out loud to yourself. Go ahead. Do it. If there are people around and you’re afraid you might be embarrassed, just whisper it under your breath. But go ahead and say the sentence, “Someday I won’t have enough time.”

Notice that when you say that sentence, it is pretty much impossible to stop at the end of it. The statement demands some kind of resolution. You feel an irresistible urge to put a “so” at the end, and to complete the thought. Go ahead and do it. Add the word “so” and then say whatever naturally comes to mind. Something like this:

“Someday I won’t have enough time, so I’m making full use of the time I have today.”

Not only have you nullified the excuse, you’ve transformed it into a compelling reason to get going. By moving the excuse from now to someday, you’ve changed it from a negative to a positive.

Do you have excuses? Lots of them? Great! Move them all to someday. And with the empty space that’s now cleared out in this present day, put your dreams into action.

Whatever your dream may be, there is something you can do right now, some specific, positive action you can take, that will begin bringing that dream to life. The first step is right in front of you. You have everything it takes, right here, right now, to move your dream from someday to now. That first step will probably be a small one, and might seem insignificant. Yet there is great power in small actions that are repeated again and again.

What do you plan to do someday? Now is when you can go beyond planning and start doing. What dream would you like to be living someday? If it’s good enough for someday, it’s even better for today. Start living it now.

This is excerpted from Ralph Marston’s book, The Power of Ten Billion Dreams. 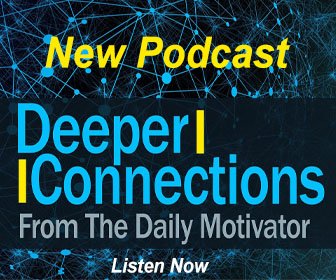